Ginny Gap is a tribute reaped from district 13 for the Hunger Games.

It is not easy being a rebel when you grow up in district 13. Either that your mother is the mayor and loves no one but herself!

Ginny’s biggest wish is for her mother to be proud of her. And Ginny really tries her best being the rebel her mother wants. Yet her every attempt often disappoints the mayor instead.

Ginny still enjoyed coming up with rebellious plans and is the most respected (or maybe “feared” is a better word) rebel in District 13 because of her reputation.

It is not easy being a rebel when you grow up in such a supervised district as 13. It does not help one bit either that your mother is the mayor and loves no one higher than herself!

Ginny’s mother, Gretel Gap, Mayor of District 13, is rumoured to have been the worst rebel in all of Panem doing her youth. But now her hunger for power has made her a lot less rebellious in order to keep her position as mayor.

But once a rebel always a rebel and when Gretel cannot be rebellious herself she just makes her daughter do her dirty work!

Gretel’s dirty work involved everything from meetings to steeling to violence against peacekeepers. Anything to show rebellion against the Capitol.

Ginny’s biggest wish is for her mother to be proud of her and the key to this love is being the rebel her mother once was. And Ginny really tries her very best.

Yet her every attempt often disappoints the mayor instead.

Ginny still enjoyed coming up with rebellious plans and is the most respected (or maybe “feared” is a better word) rebel in District 13 because of her reputation.

When reaped at the age of 16 Ginny was truly scared and did not want to go (as if she had a chose) but her mother convinced her doing the goodbye ceremony that Ginny had to go the Capitol and win the games. As a victor Ginny would be able to travel to the Capitol whenever she wants and that would make her a perfect spy!

At the interview, Ginny will be wearing a lavender dress that is short on the front but long and regal looking on the back. She will have her hair tied up in a top knot.

Having been very carefully instructed by her mother to only ally with other rebels Ginny would not even dare to dream of doing anything but that. At least not before going into the Arena.

If the opportunity is there Ginny will grab a backpack or two and maybe a weapon before taking off to meet up with her alliance away from the Cornucopia where the careers will most likely set up camp.

Stick with her alliance and work together to survive and hunt down the careers. Ginny will grab any chance she gets to go against the rules and the Capitol as the rebel she has been taught to be.

In the end – even thought her mother told her to do anything in order to win – Ginny is not as selfish as her mother and she will help her friends even if it costs her her life.

Ginny is described as a pretty, young girl with dark purple hair with highlights of lighter shades of purple that is curly and reaches a little bit over her shoulders (which she usually wears down). She has green eyes and is of medium height (1.60m). her body type is slender and her skin fair. She has an eye-shaped marking on her arm, the symbol of her mother (the watcher).

Ginny is a sneaky, smart, and (sometimes) ruthless girl who is a natural leader. Though she is compassionate to a degree she is also vengeful and doesn't forgive others easily. She is artistic and enjoys drawing. Sha has a knack for shooting guns and casting knives.

As the daughter of the Mayor of District 13, she wants to be like her mother: Pure rebel. Yet whenever she tries to prove herself to her mother, she often disappoints her instead. But she does enjoy coming up with rebellious plans and is the most respected (feared) of her age in District 13 because of her reputation.

She isn't fond of beautiful surroundings or anything pink and finds them to be horrid, but she does sometimes wonder about how life would be outside the district.

Despite this, she is not necessarily immoral; she is just misguided. Her "mean girl" facade is an act because she does not want to be seen as weak in her mother's eyes; being one is the only way she is respected by Gretel Gap, who never cared about Ginny. Only few people can see through Ginny's act, and see her for who she is, a good person.

Gretel Gap is not what you would call “a good mother” and the only reason she had a daughter was in order to have someone doing her dirty work once she had been elected mayor.

Despite never having resewed her mother’s love Ginny is loyal to her mother. She even plans to step into her mother’s footsteps and not only being a rebel but also becoming mayor one day. 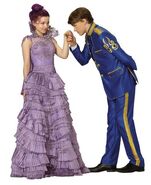 Add a photo to this gallery
Retrieved from "https://eelon.fandom.com/wiki/Ginny_Gap?oldid=277"
Community content is available under CC-BY-SA unless otherwise noted.